BRISTOL — Roughly two hours before the champions of New York took the field for their Mid-Atlantic semifinal showdown with Pennsylvania on Thursday, a special delivery arrived on their Giamatti Center doorstep.

That package came in the form of Reese Guevarra.

The late-arriving 11-year-old, who had not been at the Eastern Regional Tournament prior to Thursday as a result of a previous softball commitment in North Carolina, provided the New City, N.Y. little leaguers with a huge boost when they needed it most.

With the bags full of Pennsylvanians and the tying run already having crossed the plate in the frame, New York coach Michael Herskowitz handed the ball to Guevarra in the hopes she could end the threat.

Guevarra, facing the middle of the Pennsylvania order, got the cleanup batter to pop out to short before fanning West Point Little League’s No. 5 hitter to retire the side with the 2-2 deadlock still intact.

It proved large as New York went on to beat Pennsylvania 6-5 to punch its ticket to tonight’s Mid-Atlantic finale.

“I felt pretty confident going in there,” Guevarra said. “I also knew that my teammates could make the plays behind me to help get the batters out.”

Herskowitz never doubted that his reliever would be able to get the job done.

“I knew before the game that the reinforcements were coming,” he said. “I had complete confidence in both pitchers out there today.”

Brauer, who was battling through a bit of an illness, was also forced to battle her way out of trouble from the get-go.

Pennsylvania loaded the bases in the first with two outs for Nicole Dunlop. The Greensburg, Pa. centerfielder poked a ball that seemed as if it was destined to find its way through the right side. Instead, it struck teammate Breck Ewer running from first. While the ball hit her in the base path, it appeared to have already gone past the New York second baseman, which would have negated any interference call.

But after a brief meeting in the pitcher’s circle between all four of the game’s umpires, Ewer was still ruled out. The inning was over without a Pennsylvania tally.

Both teams pounded out 10 hits in the contest. Four of New York’s 10 hits came in the fifth when it scored three times to take a 5-2 lead. It added a run in the sixth to go up by four.

As it turned out, New City needed that final tally.

Pennsylvania pushed three runs across and had the tying run in scoring position with just one out. A double play on a line drive to center field ended the contest.

“To win this game, I had to pull out all the stops and the girls had to make all the plays. But at the same time we were trying to think about tomorrow,” coach Herskowitz said.

“We were playing for today, tomorrow, for Saturday and for Portland.”

The Softball World Series is held in Portland, Ore.

Neither Guevarra nor Lerche could believe they’re now only two wins away from making that trip out West. 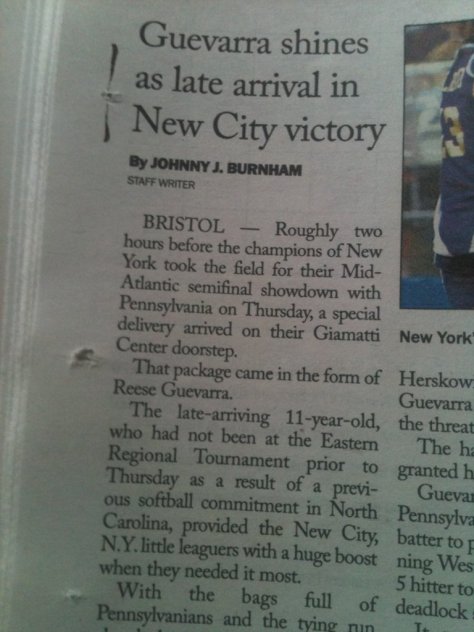