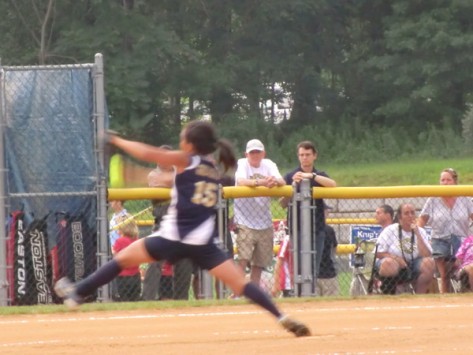 Playing in Bristol, CT, the New City team stopped the New Jersey state championship team, 5-3, in the Mid-Atlantic finals. They await the outcome of tonight’s Maine vs. Connecticut game, which will determine which team New City will face for the Eastern championship on Saturday — if weather conditions allow the late game to be completed tonight.

New City and New Jersey started off today’s game even at 2-2 after one inning, but New City then took control of the game, scoring one run in the second, another run in the fourth and a final run in the fifth inning.

New Jersey managed to score one more run in the bottom of the fifth, but was shut down by New City.

Reese Guevarra was the winning pitcher, going all six innings. She had one strike out, walked one and gave up 10 hits. She also helped her own cause by getting a hit and an RBI.

UPDATE: New City is scheduled to play the Connecticut team at 4 p.m. Saturday for the Eastern Regional championship as a result of Connecticut’s 7-6 win over Maine Friday night.